The Panasonic AJ-PX270 is equipped with a powerful 22x zoom lens with three manual rings and the high-resolution OLED viewfinder. Control switches, such as the front REC button, and a variety of terminals are positioned to match shoulder-type camera recorder specifications. Armed with networking functions, this camera recorder enables both file-based recording and more advanced network-based recording, to revolutionize your workflow. It will also connect directly to a server via a wired LAN, wireless LAN** or 4G/LTE** network, for easy configuration of a streamlined news-gathering system.

* The Panasonica AJ-PX270 does not support all of the formats included in the AVC-ULTRA family.
** For details, refer to “Notes Regarding Network Functions”.
The use of DCF Technologies is under license from Multi-Format, Inc.

Network Functions Link to from the Field in Real Time

** For details, refer to “Notes Regarding Network Functions“.
* Some formats are not supported depending on the recording mode. For details, see “Recording Codecs and Video Formats PDF“.

** For details, refer to “Notes Regarding Network Functions“.
* Some functions are not supported by some devices.

Full-HD (1920 × 1080) proxy video*1 can be streamed via a network connection (wired LAN, wireless LAN, 4G/LTE network) while recording mainstream video onto a memory card. The video can be received and playback on a PC or Mac. It also AVC-G (QoS) and SHQ (QoS) streaming modes which prioritize uninterrupted video transmission. “QoS*2” stands for Quality of Service. Using this function, bitrate is optimized to match the network condition and continue streaming distribution even when the communication bandwidth is reduced.
This provides solutions for a variety of situations such as news acquisition, while recording mainstream video, video for newsflash can be streamed live*3 to a broadcast station from the field.

** For details, refer to “Notes Regarding Network Functions“.
*1: When the AVC-Intra200 is selected, streaming output is not supported. When the AVC-Intra50 is selected, only SD Streaming mode is supported.
*2: P2 Streaming Receiver software (Windows only, not supported by Mac; available free of charge) is required for receiving the QoS mode.
*3: The video and audio signals arrive with a delay. The latency varies depending on the network environment and the hardware/software environment of the PC, server, etc.

The RTMP (Real Time Messaging Protocol) that forms one of the streaming protocols is also supported. This enables streaming distribution for RTMP compatible content, such as live video distribution services. It is also ideal for distributing live feeds of music concerts, sports events, and news flashes. (When using RTMP, the bit rate is fixed.)

The Rec during Uploading function*, which automatically and sequentially transfers recorded clips to an FTP server or cloud service, has also been newly added. Uploading is done in the background, and recording/playback continues during the transfer. The transfer status can be checked on the LCD monitor or viewfinder. If the network is disconnected during transfer, or the power of the camera is turned off, transfer resumes when the connection or power is recovered. Manual transfer of up to 100 registered clips is also possible.

Cloud SolutionEven smoother operation is possible by using a cloud service. Proxy files that
are automatically uploaded to a cloud server can be edited (remote playlist
editing) from a network, and only the necessary data can be sent from the
AJ-PX270 to an ingest server.

· P2 Cast: P2 Cast is the cloud service Panasonic provides for broadcast and production use.

IP connection (wired or wireless) with LiveU or TVU Networks devices enables parallel use (bonding) of multiple cell phone lines. Live streaming with the QoS mode gets a higher bit rate and more stable quality. And FTP transfers using a Rec During Uploading function gets also faster transfer speed and better stability to achieve a faster overall workflow. In addition, the status of the LiveU or TVU device is displayed in the camera’s viewfinder to allow easy confirmation of the network connection conditions.
Combined with Panasonic’s P2 Streaming Server (P2SS) and P2Cast, this produces a comprehensive solution for a variety of broadcast needs.

Viewfinder Displays of the Connection Conditions (marked in red)
* An example of AJ-PX5000G. 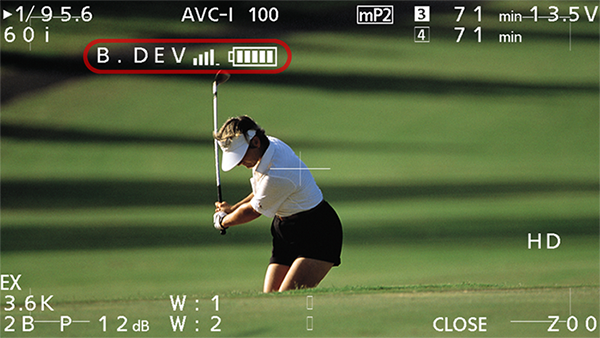 *1: Flash Band Compensation will not operate while digital zooming.

This function detects and precisely compensates the flash bands (bands of light and dark) that often occur in still cameras equipped with an MOS sensor.

The Variable Frame Rate function (AVC-Intra100)* was inherited from the Panasonic VariCam, which is widely used for producing movies, TV series and TV commercials. Featuring a variable frame rate of 1 to 60 fps, this function creates a wide range of film-camera-like images, such as overcranking for slow-motion and undercranking for quick-motion effects.

* The focusing time varies depending on the shooting conditions and subjects.

The electronic level lets you easily confirm camera tilting on the LCD monitor screen. It helps to keep the camera level during handheld shooting, low-angle shooting and high-angle shooting.

The Panasonic AJ-PX270 is the first handheld camera recorder that features the AVC-ULTRA codec family as standard. To meet the various needs from mastering to streaming, the image quality and bit rate can be selected to match the application.

An intra-frame compression method that is highly suited to image production. In addition to the conventional AVC-Intra100/50 codec, the AJ-PX270 features the AVC-Intra200 codec with twice the bit rate (10 bit quantization, 4:2:2 sampling, and a bit rate of approximately 200 Mbps*1). With superb images that approach uncompressed quality and 24 bit audio, it offers a level of quality that meets the needs of mastering and archiving.

*1: For 1080/59.94i.
*2: Proxy data cannot be recorded when using the Loop Rec or Interval Rec function.
Proxy data is low-resolution video and audio data with time code, metadata, and other management data in a file format.
The use of DCF Technologies is under license from Multi-Format, Inc.

1080/60p* (50p) full frame progressive recording is supported for the first time in the AJ-PX270. In addition to being able to record with the AVC-Intra100 or AVC-LongG25/LongG12 codec, the camera can is capable of camera through output from the 3G-SDI and HDMI output terminals.

The Panasonic AJ-PX270 comes with two slots for the microP2 card, the broadcast-use memory card downsized to match the size of a conventional SD memory card.

*1: Total card capacity includes space for data management, such as system data; therefore, the actual usable area is less than the capacity indicated on the card.
*2: microP2 and P2 cards cannot be simultaneously recorded on.

*1: microP2 and P2 cards cannot be simultaneously recorded.
*2: Recording is possible only through the microP2 card slots.
*3: Slots cannot be switched during recording.
*4: The text memo and shot mark cannot be added in Loop Rec, Interval Rec, or One-Shot Rec mode.

The metadata function attaches metadata (text memos tagged to time, GPS data, selected character strings and frames) to P2 files. Metadata can be edited using a tablet or smartphone connected via USB or wireless LAN*. Metadata can be used effectively for searching and management, facilitating the editing, distribution and archiving of video data.

* For a wireless LAN connection, the AJ-WM30 Wireless Module is required.

New Design – Switches Match Like Those on Shoulder-Type Models

The Panasonic AJ-PX270 is equipped with 2 channel XLR mic/line audio input terminals supporting a +48V phantom power supply. They are arranged on the front and rear sides of the unit, just like on a shoulder-type model. The front mic terminal is located behind the rear mic mounting section, eliminating problems resulting from catching protrusions on the side panel. The rear external audio terminals are located on the right side for comfortable holding of the AJ-PX270 against the chest during recording, and also permit easy connection and disconnection while holding the camera recorder in shooting position.

The large-capacity battery is housed in the main body, and does not extend beyond the rear panel. This ensures comfortable holding of the AJ-PX270 against the chest. When power is supplied to the DC power supply input terminal using the AC adaptor, the battery can be changed while recording.

The zoom lever located on the upper part of the handle is also provided with a multi-stage variable zoom function. It provides the same smooth zooming operation from a super-low speed as the zoom lever on the hand grip, allowing smooth zooming when shooting from a low angle or using a tripod.

Even with its high-power zoom lens, the AJ-PX270 is compact and has a low center of gravity. It remains stable during handheld shooting, and provides excellent visibility and a wide field of view. The lens hood with a built-in cover improves convenience and safety while moving. The magnesium alloy diecast chassis is rugged and durable.

Combination with the AJ-PG50 Field Recorder, using either HDMI or SDI connection, enables back-up recording linked to the Panasonic AJ-PX270.

* Storage media with more than 2 TB of capacity cannot be used.

Multi-Camera Synchronizing with Genlock IN and TC IN/OUT

This handheld camera recorder supports a multi-camera configuration. It features a built-in SMPTE time-code generator/reader, TC input/output, and Genlock input for multi-camera recording with time-code synchronization. Images can be synchronized and output to a switcher, providing the same level of operation as many shoulder-type models.

The P2 ROP App (downloadable free of charge from the Apple App Store) for iPad is available. It enables iPad to control functions/setting of the AJ-PX270 Camera Recorder remotely via wireless connection.
P2 ROP App can control Focus, Zoom and variety of settings similar to those of the AG-EC4G Extension Control Unit controls, including picture quality settings and REC start/stop. Easy-to-see value display and easy-to-operate up/down touch keys provide settings and adjustments. Proxy browser is also built into the app so that operator can adjust the setting while checking recorded clips with thumbnail and previewing. Metadata can also be displayed and edited on iPad to support post production work.

** For details, refer to “Notes Regarding Network Functions“.
* It supports to iOS7.1 and iOS8.1.
· Apple App Store and iPad are service marks or trademarks of Apple Inc. registered in the United States
and other countries.

Wired remote operation is enabled with the optional AK-HRP200G Remote Operation Panel via LAN connection. In addition to joy stick operation of the aperture and pedestal, as well as menu-operated adjustment of the picture quality, this allows remote-controlled focusing and zooming on the AJ-PX270.

* Only functions that are supported by the AJ-PX270 can be controlled.

There are no reviews yet.

Be the first to review “Panasonic AJ-PX270” Cancel reply